Hackers can request assistance from HackerOne in cases when discussions with the program have been attempted and there has been no satisfactory resolution. Vice versa, programs can also request mediation when the Code of Conduct has been violated.

Hacker Mediation can be requested for the following reasons:

Hacker mediation is used to raise concerns about reports to security teams and facilitate discussions between hackers and customers to enable a more favorable outcome for everyone involved. Please keep in mind that if a program is not managed or triaged by HackerOne, then the time to fully resolve the mediation might take longer than usual. 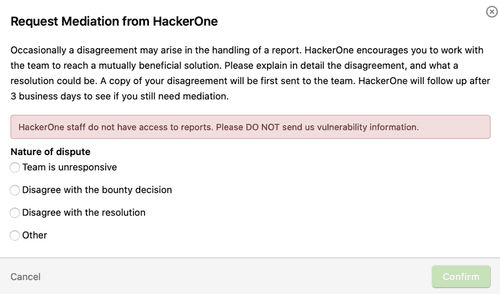 When providing information about the mediation, please be as descriptive as possible about the nature of the disagreement. If no information is provided in the mediation request, this will increase the mediation response time as the mediation team will have to take time to make sure they understand the context to provide the proper assistance. Mediation is here to support. Please be advised that for programs not Triaged by HackerOne, Mediation may need extra time to work with the program to be granted access.

Note: Please don't share any report details with HackerOne in the initial request without explicit mutual agreement from the program. HackerOne will arrange it with the program's security team if more information is required to address the problem.

In most cases, HackerOne will not be able to mediate for reports that have been closed for over 3 months. Please respect the guidelines above and only request mediation if it's deemed absolutely necessary. Abuse of the hacker mediation process will result in this privilege being revoked from your account.

Finally, keep in mind that HackerOne is no longer able to add external researchers to original report submissions due to security and privacy concerns related to doing so.

Mediation requests are different from Support requests. When requesting mediation, it’s important that you request for the right reasons, as some issues are best taken to HackerOne Support instead. Here’s a table to help you see the difference between the type of requests:

The Make It Right Fund

There may be cases where HackerOne may believe a hacker’s submission has been handled incorrectly. We want to make sure hackers are awarded for their efforts in such cases. After extensive backend reviews are completed of the specific report, the hacker may be considered for a discretionary correction from the HackerOne Make It Right Fund. Please keep in mind that not every report is eligible for Make It Right and the decision to recommend or consider a Make It Right award belongs to HackerOne. Usage of Make It Right may be noted in the report’s record for transparency.