As programs receive vulnerability reports and work on deploying fixes, they need proof that their vulnerabilities have actually been fixed. Retesting is a good way to secure the protection of your asset’s data by asking hackers to verify whether a fix has been made. With retesting, you can elect to have hackers retest your vulnerabilities to verify the fixes.

Note: For response programs using HackerOne's triage services, the triage team will retest the vulnerabilities to verify the fixes instead of hackers.

To have hackers retest a vulnerability:

The original hacker that submitted the vulnerability will be invited to take part in the retest.

The hacker will submit their findings in the Retest findings form at the bottom of the report. The form consists of these fields: 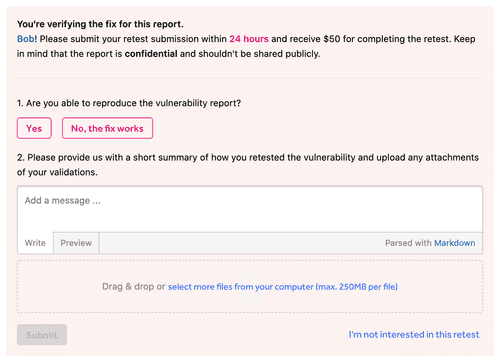 After the hacker submits their findings, you’ll be prompted to either Approve and resolve or Reject the retest.

If you choose to:

If the original hacker declines to take part in the retest and your program is: